Our ferry trip across the Sea of Cortez provided some great scenery and was an opportunity to meet several interesting people – both Mexicans and other travelers.  Unfortunately we did have a few mishaps over the course of the journey.  After a less-then-restful night spent sleeping on the benches in the ship’s restaurant, I headed to my favorite cool spot on the upper deck for some fresh air.  When we were hit with heavy rains an hour later, I was headed back to the main level for cover when my feet flew out from beneath me on the treacherously wet iron staircase.  I proceeded to descend the last half of the staircase on my butt.  Ouch!  Ouch! Ouch! Ouch! Ouch! Ouch!

As we came into sight of Mazatlan, the ‘Pearl of the Pacific’, we spent the last couple of hours of the trip spotting dolphins surfacing from the waves, chatting with other passengers, and enjoying the tremendous views.

When it was time to disembark, we found the Ural with a flat tire which made getting up the off-ramp a bit of a challenge. 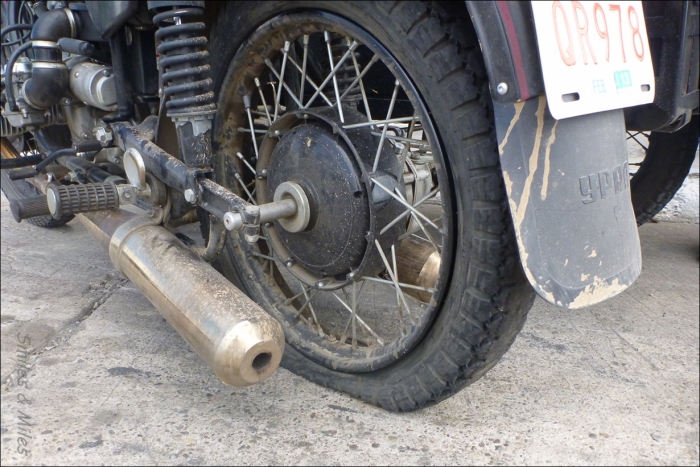 As we sailed through the exit door, our bag sailed off the back of the bike.  In the pressure to get off the boat quickly, we hadn’t noticed that it wasn’t tied down.  We stopped just outside the boat to put air in our tire and re-pack our belongings and were on our way, accompanied by a new traveling companion, Franco, a Swiss motorbike traveler in his 13th month of a world tour.

After a long hot night on the boat, we were craving a cold lunch in a shady spot.  Ceviche at a road-side restaurant fit the bill.  We then continued along the coastal route through Rosario (a colonial mining town) San Blas (a tranquil fishing village slated for decades by government tourism officials to become the next big resort town but where development is now permanently on hold).

Although we passed through a couple of light rain storms, our spirits weren’t dampened and we continued to enjoy the friendliness of the Mexicans on the mainland who were doing almost as much smiling and waiving as those in Baja.  I must admit however, that my incredibly comfortable sidecar chair was no long incredibly comfortable after my earlier tumble down the stairs.  I spent a couple of hours trying to find just the right seating position to keep me from wincing at every vibradore.

The roads of Mexico are lined with stands selling everything imaginable.  When we happened to spot one selling one of our favourite treats, jackfruit, we had to stop.  As we wandered around the side of the road enjoying our morning snack, we were marveling at the tree beside us and wondering what it was.  Upon further examination, we discovered that it was actually a jackfruit tree, laden with fruit that was probably two feet long.

Much of our time along the coastal route was spent under a canopy of greenery with tiny yellow butterflies and enormous white butterflies floating above us.

Along with endless dogs, cows, goats, horses, and burros, the ditches were filled with plants that this amateur horticulturalist struggles to keep alive in my garden at home:  castor bean, butterfly bush, and cana lilies.  Our views along the coastal route alternated between pristine bays, ramshackle fishing villages, and the backs of pickup tracks packed with locals.

Eventually we made it to Puerto Vallarta– the beach town stretching around the Bahia de Banderas and backed by lush palm-covered mountains.  We enjoyed some great people-watching along the malecón and picturesque cobbled streets and viewed the crown-topped steeple of the Templo de Guadalupe.  Just south of the city we came across an interesting-looking hotel on a rocky piece of the Pacific Shore, Mar Sereno.  Although the front door was wide open, it took us almost 15 minutes to actually find someone in the hotel.  Given that the entire place was empty, he agreed to give us a reduced rate and thus our evening on cloud nine began with an entire luxury resort to ourselves.

It was fortunate that we stopped when we did because a storm hit within minutes of us getting our bags into the room.  It was fabulous to watch the storm with the windows wide open on two sides of our corner suite.  The rain poured straight down for hours and the lightening put on quite a show throughout the night.

When the rain cleared in the morning I was off to swim and explore the resort.  The place looks like it was absolutely stunning in its time but with a huge reduction in foreign tourism over the last ten years, it looks like it is now empty most of the time and getting run down.  The doors are made of intricately carved solid wood, the hallways are painted with murals and the entire hotel is filled with ornate tile work and ceramics.  The main pool overhangs the lower levels of the hotel and while you are swimming, all you can see is the ocean and you can’t help feeling like you are swimming in the Pacific.  At ocean level there is a second restaurant, man-made beach inland from the rocky shore, and seawater pool that fills up with the tide.

Eventually we tore ourselves away from this beautiful but sadly neglected paradise and continued our southbound journey to Manzanillo, Mexico’s busiest commercial seaport and the site of more evidence of Mexico’s declining tourism trade.  Although the government has poured millions of pesos into renovation projects in the city to attract visitors, tourism isn’t keeping up with development and for every new nightclub or restaurant that opens, another shuts down.  Over the last few days it has been more than a bit depressing to see beautiful destinations falling into decline because so many people are simply afraid to visit.

One thought on “Coastal Capers”